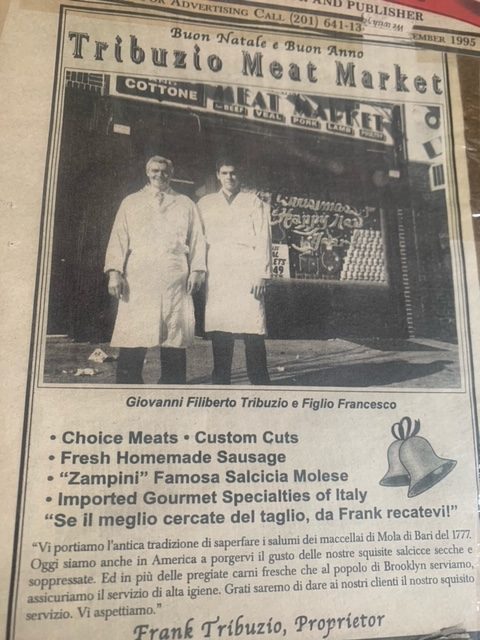 Let’s start from the beginning.
My name is JohnFranco Tribuzio. I come from an Italian American family. My father grew up in a small town in Italy called Mola Di Bari. The town itself is small but filled with gems of people. There my father since the age of 8 grew up working as a butcher. Yes, I said at the age of 8. A lot of you may think wow working with knives at the age of 8 isn’t that dangerous? Yes, when my father first told me I couldn’t believe it but considering the time that we live in now compared to his generation, things were and still are very different.
My father Francesco G. Tribuzio was born on July 17th, 1971. Growing up my father’s childhood wasn’t easy, he would wake up go to school and once school finished, he would rush back home and would go work in the butcher shop that his father owned. Keep in mind that my father’s family comes from 4 generations of butchers so once my grandfather knew he was having a son there was no way his son wasn’t gonna be learning the family business. Having the last name Tribuzio was kind of famous in Mola because of how small the town was.
My father’s side of the family-owned around 7 butcher shops in Italy and was known for their great products. My father’s family butcher shop first opened in the year 1964 in Mola Di Bari. As a kid, my father was the youngest child out of 3. He had two older sisters Vittoria (Victoria) who was the middle child and Chiara (Keara) who was the oldest. At the age of 18, he was enlisted in the Italian army and left for a year of service. His job in the army was to be “of course” the Butcher. He would cook in the kitchen and take care of guard duty during the night shift. When my father came back from the army he was in training to become a detective in the police force. My father always loved racing and cars but when my grandmother found out that they would send her son to go after drug smugglers with guns and violence she couldn’t let her son do it. They both sat down at the table and my grandmother says Francesco “I love you with all my heart you are my baby boy and I will never stop loving you but I can’t see you doing this job and fighting with your father constantly. My love, I won’t be able to live with myself if you go down this path. But I have an option for you so you can get away from here there is nothing here for you. You are meant for better things with your life.” She then shows him a one-way ticket to America and says I want you to take it.”
My father understood where his mom was coming from but was con flicted. Part of him wanted to leave and part of him wanted to stay home and become a detective. After a long 3 hour talk, my father decides to take the ticket and leave for America. He comes to America in 1971 with 621 dollars in his pocket. He knew very few people but started working right away for very little money. When my father came to America he couldn’t speak any English and started working in the supermarkets cutting meat. He worked long hard hours for little pay until he got his chance to open his butcher shop. He first opened Tribuzio Meat Market with his father in September of 1995. The motto that lasted generations for Tribuzio Meat was “Quality over Quantity”.
previous post

Street food in Bari, three places not to be missed

Daniela’s Dish from Casamassima to Philadelphia

Kara, a piece of Italy in Melbourne