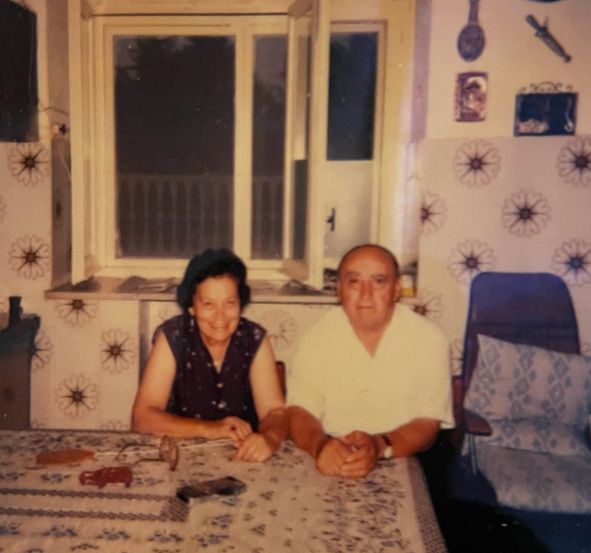 When asked about myself, I typically start by saying that I am Italian. I without a doubt I define who I am as a person because of my roots, my family, our beautiful traditions, and my upbringing.

My story starts with my grandparents Francesco Basta and Esmeralda LaPierta Basta. And a small mountain top town in Calabria that’s surrounded by the sea, called Mandatoriccio. My nonna would like to tell the story of how when her and my nonno first met by saying that her hair wasn’t brushed and she was barefoot. But he insisted they would marry one day. Soon after they met, my nonno was sent to fight in WWII.  Luck was unfortunately not on his side, as he was captured by the Soviet Union and held as a prisoner. It’s still uncertain if he was released or escaped. When the war was over he made his way back to home to find that luck was on his side this time. My nonna had waited for him. They married immediately upon his return, and started their family.

In search of the American dream he migrated to the U.S. in the early 1950’s. Over those years he worked multiple jobs to provide for his family and he’d visit when he could. During these visits he’d contemplate whether he should stay in Italy or go back.

Almost a decade later he finally sent for his family. In 1963 my nonna, my dad, and his siblings set sail on the SS Cristoforo Colombo to New York City. As middle class passengers, my aunt recalls how luxurious it was.

After years of working as a chef for a famous restaurant in New Jersey, he decided it was time to open a restaurant of his own. San Remo Ristorante in Orange, NJ was a full family affair. My nonna was known to roll out hundreds of ravioli a day.

My nonno and nonna had created a beautiful life but when my father was 15, they made the decision to go back to Italy. Leaving my father and uncle with the responsibility of running the restaurant. Following in my nonno’s footsteps, my father too became a chef. As a young man he absorbed everything that was taught to him, both at home and the restaurant.

My grandparents quickly feel back into the lifestyle of Italy, as if they never left. My nonno was a very respected man. He was honored and given the title of a Cavaliere di Agricoltura by the Italian government for his achievements in the production of organic olive oil and wine. My nonna, a very amiable women would frequently host gathering at their home. They were very generous people and enjoyed the simple pleasures that life had to offer, like good food, wine, and company.

Fast forward to me. In 1986 at only six months old my parents took a leap of faith and moved to Italy, in order for my father to help my nonno with his 250 acres of land he owned. They soon realizing it wasn’t for them. After coming back to the states, we’d visit yearly to help with the vendemmia.

Growing up I lived a pretty typical Italian-American lifestyle, just as many have. However being the daughter of a restaurant owner meant summers would be spent with my grandparents. So every summer as soon as school let out my brother and I were sent to Italy.

These childhood and teenage years were by far the most memorable and formable. They molded me into the person I am today. Although I may not visit as often as I’d like to, I deeply cherish our small town. It’s the home of my ancestors, my roots- where I am from. In Italy is where I discovered my true passion and love for food, cooking, and the authenticity of our culture. For as long as I can remember I was always in the kitchen with my nonna. She didn’t let me do too much- she said I was too rough or I’d make a mess. However I had to watch, listen, and soak up as much as I possibly could. Just as my father did when he was young.

Keeping traditions alive, especially food related has always been important to me. My father leaned through my grandparents, and I was fortunate enough to learn from both them and him. I now feel the closest to my grandparents and Italy when my father and I jar eggplant, just like nonna. Or make homemade wine and salsiccia, just like nonno. I was taught that passing these traditions down from generation to generation is actually preserving our culture, and never forgetting where we came from. I now use Instagram as a platform to share my families stories, our traditions, and recipes.

A story that remained secret for many years