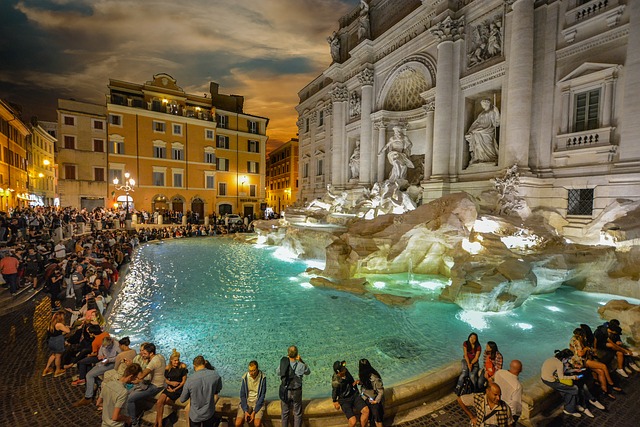 Today in Buongiorno Italians we will make you discover 7 curiosities about the Trevi Fountain.
As you know on October 30th and 31st 2021, Rome hosted the G20 Heads of State and Government Summit. The members of this select group met to discuss state affairs but also took time to enjoy the Roman dolce vita, between banquets and visits to some tourist spots in the Città Eterna.
Without a doubt, the obligatory stop for them and every tourist is to visit the famous Trevi Fountain. We present a list of curiosities about this work of art that you did not know:
1. The name of Trevi derives from “Tre Vie” and refers to the point where the three streets that lead into the square join.
2. Its construction began in 1453, but it was officially inaugurated on May 22, 1762.
3. The Fountain is not the work of a single architect, but of three: Leon Battista Alberti, Lorenzo Bernini, Nicola Salvi, and Giuseppe Pannini.
4. Those who visit Rome must go to the Trevi Fountain and throw a coin into the central basin. This tradition must be accomplished by placing the right hand on the left shoulder and with the eyes closed.
5. In the past, when men had to leave for work or military service, their girlfriends made them drink the water from the fountain from a new glass and then they break it. By doing so, they ensured the loyalty of their lovers.
6. According to another tradition, if you throw two coins instead of one, you will find love and if finally, you throw three, you have an insured marriage (or divorce, if you are already married it is very convenient and cheaper!)
7. The coins accumulated in the Fountain are equivalent to about one million euros per year.
Sometimes up to € 3,000 is raised in a single day. Since 2007, the money raised in the Trevi Fountain is donated to charity.
previous post

Where to stay in Puglia

All about the black panther in Puglia

I didn’t know the fact about Tre Vie! Interesting 🙂