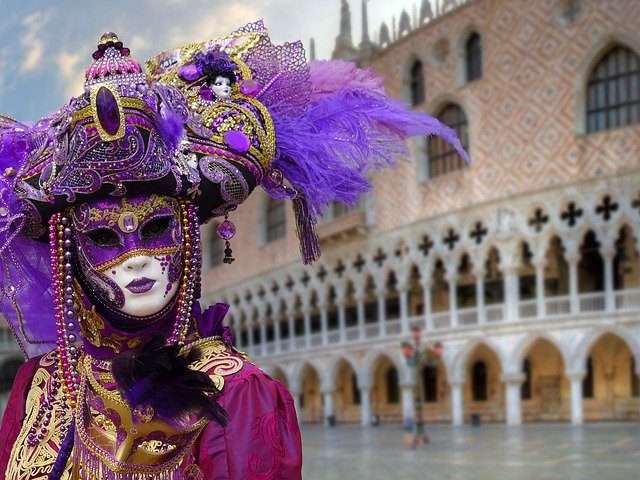 1. Venice: the most famous carnival in the world
It began with a victory of the Republic of Venice against the Patriarch of Aquileia in 1162. In the joy of this victory, people thronged to Piazza San Marco.
The objective of this party was to give the people the opportunity to be free for a few days and thus make
them believe that the government was not in control. However, what they wanted was to know what people in the government really thought in those days of frenzy.
In its golden days, around the 18th century, many aristocrats from different places visited Venice, being the
most normal thing for princes and nobles to escape to enjoy the festivities for a few days, or even months.
Thanks to the masks and costumes, the entire population was on equal terms without making distinctions
of sex, religion, or social class.
2. The oldest Carnival in Italy: Putignano
The Carnival of Putignano, in the province of Bari, is one of the most famous and ancient carnivals in Italy.
According to tradition, it has very ancient origins dating back to the end of the fourteenth century, at the time when the Knights of Malta, who ruled the area, transferred the remains of Santo Stefano from Monopoli to Putignano to protect them from the Saracens. To celebrate the arrival of the relics, the peasants left the fields, smeared their faces with flour, and recited verses, satires and jokes.
The characteristic mask of the Putignano Carnival is Farinella, whose name derives from the ancient local dish.
3. Carnival of Viareggio
The first edition of the great show that is today the Viareggio Carnival took place in 1873. At the end of the
century, triumphal floats appeared in parades. Not even the First World War was able to destroy the demonstration. Burlamacco and Ondina are the symbolic masks of Viareggio. The first appearance of the two masks was in the poster for the Carnival of 1931.
4. The Battle of the Oranges at Ivrea’s Carnival
In town of Ivrea, in Piedmont, the carnival does not stand out for its costumes or floats, but for its pitched
battle of oranges, the Battaglia delle Arance, which represents a historic popular revolution against the French that occurred during the middle Age.
​The Battle of the Oranges is a popular rebellion against the feudal tyranny that starved the people. The carriages symbolize the feudal lords who try to subdue the town protected with masks that allude to ancient armor. Meanwhile, people on foot (aranceri) fill the squares and represent the people.
The undisputed protagonist of the Ivrea Carnival is the
Mugnaia, which symbolizes Victoria, a miller turned into a hero for beheading the tyrant and unleashing the popular revolution in the region.
5. The terrifying and particular carnivals of Sardinia
Carnival in Sardinia is very different from all other carnivals: ancient, ancestral, rooted in medieval traditions. An evocative ritual, different from area to area, full of references to the myth and agricultural tradition of the island.
In Sardinia, the carnival has many faces: each community celebrates it according to its own codes, vocations and particularities.
Sometimes witches, scary figures, men dressed as women or, fearless knights, populate it. They are often
masks that impersonate the followers of the cult of Dionysus. The Carnival is full of wooden masks like those of Mamoiada: blackened with grease with very heavy cowbells and are more frightening than anything else.
previous post

A dish that warms body and soul the Passatelli in broth

The beginning of Marina’s dolce vita