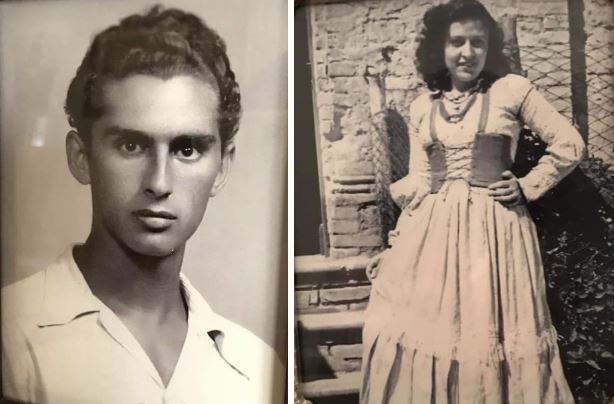 My Family Stories and Secrets:
My family history has some pretty interesting stories.
Should I start with World War II when the Canadian Solider fell in love with my maternal grandmother? Or when she had to live in a cave while the war took place?
My maternal Great-grandfather that left to find work in Argentina only to never return to his kids? How about my Zia’s voyage from Italy on the S.S.Andrea Doria that sank off the coast of Nantucket, Massachusetts in a
collision one very foggy night?
My maternal grandfather and his parents leaving all of the wealth they had in Sicily to avoid being involved with the Mafia?
My paternal grandmother that passed away only two months after my dad was born which happened to fall on his parents one year wedding anniversary?
Yes, sounds a little bit dramatic, but these were the stories I grew up listening to on my grandmothers front porch swinging on the dondolino, while I ate my ice-cream from a tiny corner store in Jersey City, New Jersey.
This is probably the reason I was never into fiction stories or movies. I mean these real life experience’s have no comparison, and essentially all of these events resulted in decisions that led to how I came to be today.
So when someone asks me “what part of Italy is your family from?” I get to tell how blessed I am to have roots from three beautiful regions of Italy!
On my mothers side my sweet grandmother and amazing chef Maria DiVincenzo was owner and cook of “Buon Gusto” Ristorante from Ortona A Mare, Abruzzo. She was a quiet girl who met my very outgoing and
dancing/music loving grandfather Salvatore Russo from a small town called Carini in Sicily. They secretly married one late night in August in Ortona and eventually had 4 girls. My mother Marina Russo was the 4th child born in Ortona A Mare.
On my father’s side my Grandmother Maria Diciolla was from Noicattaro, Apulia. Aside from being an extremely talented woman who made wedding gowns by hand, those who knew her said she was the life of the party and extremely kind hearted. She met my handsome Grandfather Achille Gigante who is from Mola Di Bari, Apulia. Before they had a lavish wedding andcmoved to Mola, my grandfather would ride his bike a total of 20km just to go see her. They soon after gave birth to my dad Francesco Gigante in a small home in Mola di Bari right across the street from the beautiful Adriatic Sea.
How did my family arrive in the USA?
Basically after my paternal grandfather had enough of my dad and his shenanigans, my favorite being the story of when he crashed his motorino into an old lady’s kitchen in Bari while she was peeling potatoes because his brakes stopped working (I can only imagine the look on the poor old lady’s face). He was then sent at 16 years old to work with the Merchant Marines.
On a voyage to Russia he and crew members experienced rogue waves.
Once he arrived to mainland Russia, he made the decision to disembark the ship. What a blessing that decision was because once the ship went back out to sea, it caught fire and sank in the Arctic Ocean. My dad then arrived back to Mola di Bari in the the early 1980’s. My grandparents decided to book a flight on Alitalia with his younger siblings to move to Hoboken, New Jersey, USA.
My mom came in the early 1970’s on a 2 week voyage to the USA on the S.S. Michelangelo departing from Napoli to the New York Harbor with her three older sisters, parents, and grandma. My mom cried everyday of that voyage that the captain named her “albero piangente” a weeping willow or literal translation a crying tree. My mom was 6 years of age and all she could remember was the smell of cheese that came from their cabin my grandmother had stocked up on. They then lived in Jersey City, New Jersey, which is where I was born and raised.
Leaving Italy on the S.S. Michelangelo
Left to right : Zio Avio, Zia Catia (blue jacket),Grandpas Friend Pietro (Brown Jacket), Grandpa in the back with gray suit), Zia Fabiola (yellow Jacket), Grandma (blue print dress) Zia Gianna (Red and white dress) Zia Franca (red pants) Mom (blue pants)
My Family today
My parents eventually met here in the United States, married, and had two children my younger brother Stephen and I. Today my father owns a successful Iron Works business called Hoboken Iron Works and my mom holds a Masters degree in Marriage and Family Therapy. My brother is a member of the S.W.A.T. team,
and I am a Licensed Dietician/Nutritionist, Holistic Lifestyle Coach and Author of “My First Healthy Habits Book.”
I find it amazing that through the sacrifices and tough decisions my family made, I would not be here today. Although I am a first generation Italian American woman I feel very connected to my Italian roots and anytime I travel back to Italy I always feel like I’m back home.
Alla Prossima,
Maria Christina Gigante
INSTAGRAM: https://www.instagram.com/mariachris_tina/
previous post

The incredible life of Giuseppe Spagnolo

BACI PERUGINA: the birth of the iconic chocolate from Italy to the world