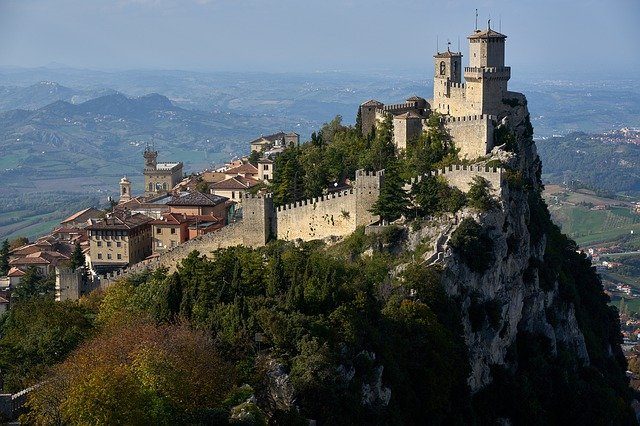 Today in Buongiorno Italians we will tell you some curious facts about the Republic of San Marino, the third smallest country in Europe, behind the Principality of Monaco and the Vatican:
1. It does not belong to the European Union, although the euro is its official currency.
It is one of the last tax havens in Europe. However, its economy is based, above all, on ceramics, postage stamps (highly valued by philatelists), and tourism, which accounts for almost 50% of San Marino’s GDP.
2. The Republic of San Marino is the world’s first republic.
Tradition indicates that a Christian stonemason named Marinus, who was fleeing the religious persecutions of the Emperor Diocletian, found the perfect refuge with his companions of faith on Mount Titano. The fugitives decided that at the top of that rock they dominated for miles around and could defend themselves adequately.
Perhaps those roots contribute to the fact that the inhabitants of San Marino have welcomed other rebels and refugees from history, from Garibaldi, to the more than 100,000 refugees who arrived during World WarII.
3. San Marino is that it maintains its limits as they were established in 1463.
The Italian provinces the Marche and Emilia Romagna surround San Marino. Moreover, although Napoleon Bonaparte tried to convince them to expand their borders, the people of San Marino responded: “Thank you, sir, but we’re fine like this”
4. The castles of San Marino
They are the most visible face of the Republic and appear on the flag and coat of arms of San Marino. Among the most important castles of San Marino, the three that crown the peaks of Monte Titano stand out:
Rocca Guaita, Cesta, and Montale. Each castle is equivalent to the Italian provinces.
5. The suspicion of the Sammarinesi
​Historically, the inhabitants of San Marino have been very suspicious in favor of their freedom and autonomy, an example of this is a medieval tombstone in the Porta de San Francesco that warns that foreigners are not allowed to use weapons.
We can only recommend that you come to San Marino if you are visiting central Italy. Do not forget to taste its excellent and varied cuisine with dishes such as fagioli con le cotiche (bean and bacon soup) or nidi di rondine (a baked pasta dish with smoked ham, beef, cheese, and tomato sauce). We promise you will not regret it!
INSTAGRAM: https://www.instagram.com/robipetrus/
previous post

All about the black panther in Puglia