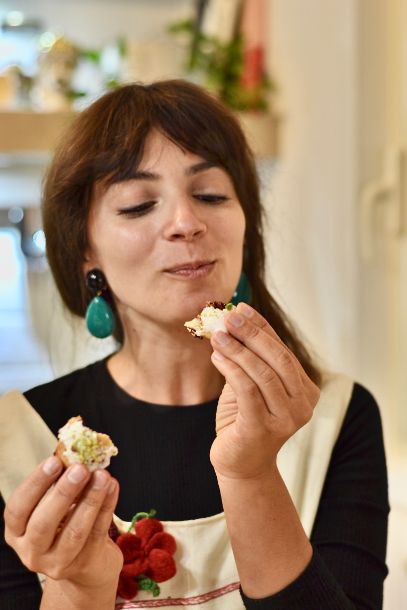 As a Sicilian, this pasta recipe is very dear to me and that’s why I have included it in one of my virtual products which I have called “A Taste Of Italy” and now for you here.
Pasta alla Norma – pasta with aubergines, is one of the most wanted and delicious Sicilian “primi piatti vegetariani” sugo you can find in Sicily which I love to pair with another Sicilian pasta share
called “Busiate”. 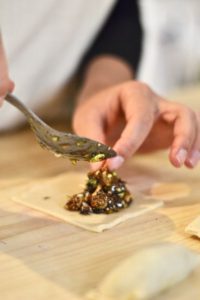 The dough for this recipe is very simple (see dough recipes section) but often in Sicily it is made with ancient grains. This shape is originally from the Trapani’s region and it’s a sort of maccheroni but rolled on itself creating a spiral shape.
The name Busiate seems to derive from the use of “buso” – a plant which grows on sandy soils called Disa originally used as a stick to create this pasta shape. However, nowadays, Trapani Busiate pasta can also be made from pasta extruders as well as dried at low temperatures to have the best quality.
The spiral shape makes them delicious and excellent for holding rich pasta sauces. This is why tradition has them seasoned with tomato fish sauce, and most known with Trapanese pesto. The recipe of Busiate with Trapani pesto seems to have very ancient origins. In fact, the mix of garlic, oil, basil, almonds and pecorino cheese dates back to the times when the Genoese ships landed at the Trapani harbor bringing with them the well-known Genoese pesto. But it took on an entirely Sicilian variant with the addition of local ingredients such as almonds or tomatoes.
BUSIATE ALLA NORMA
Serves 4/6 people
For the pasta dough:
● 500gr Semola Rimacinata (I used a mixture of semolina and ancient grains)
● 225 – 250ml of water
MAKE YOUR OWN BUSIATE SHAPE:
Cut the dough in half and roll each piece into a long rope about 1 cm thick. Slice these into ribbons about 1 cm wide and 8/10 cm long that you’ll then wrap around a thin knitting needle rod or a wooden skewer one by one, forming the typical spiral shape. Continue until you have used all the pasta dough and then leave the busiate to dry a bit on a floured tray or surface.
Ingredients:
● 4 small violet aubergines
● 4 big fresh rounded tomatoes (previously cooked in boiling water) or 20 little cherry tomatoes
● 2 big clove of garlic finely chopped
● 100 gr of tomatoes rustic passata can
● 1 teaspoon of sugar (it depends of the tomato acidity)
● 1 or 2 teaspoon of salt (+ extra coarse salt to fry the aubergines & 1 tbsp of pasta water)
● Black pepper
● 3 tbsp of Extra Virgin Olive Oil (+ extra for frying the aubergines)
​
To serve:
● Grounded almonds
● Basil
● Salted ricotta
● A drizzle of extra virgin olive oil
METHOD:
Step 1:
● Slice the eggplant about 1/2 inch thick and set them in a colander or wire rack over a sink, bowl, or rimmed baking sheet. Sprinkle salt generously over all sides of the eggplant and let them sit for about 40 minutes to 1 hour. (NB the salting removes excess liquid and some of the bitterness and also depends on the variety of the aubergines you use).
● Rinse lightly under cold water, place on paper towels, pat dry and chop them into cubes
● Cook the eggplants in an abundance of oil, (olive oil or I used rapeseed oil), without crowding. You will undoubtedly have to cook in batches; take your time and cook until the eggplant is nicely browned and soft. Once well fried, place them on a plate with some paper towels or kitchen roll.
Step 2: 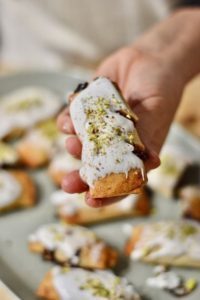 ● Once the eggplant is cooked, clean your pan of the excess olive oil and turn the heat to medium, add the garlic and cook until it colors a little bit. Add the fresh tomatoes, passata (or you can use concentrated tomato paste) along with some salt, sugar and black pepper; cook for 5 mins stirring it occasionally.
● Add your fried aubergines and basil and let it cook for another 10 mins lowering the heat down
● In the meantime, bring a large pot of salted water to the boil, drop your busiate into the water and cook them for about 3 to 4 minutes (it depends how long you let them drying)
● Cook the pasta al dente and not ‘mushy’. While it’s cooking, drain the pasta and toss it with the tomato sauce and the aubergine. Taste and adjust the seasoning, then top with grounded almonds, salted ricotta, basil and serve with a drizzle of olive oil.
This recipe is part of the “A Taste Of Italy” series which can be purchased here within The Pasta Studio.
Watch the style of the initial here.
If you want to learn more about Alessandra’s work, please visit her Instagram profile and her website for more pasta recipes and Sicilian flavors.
previous post