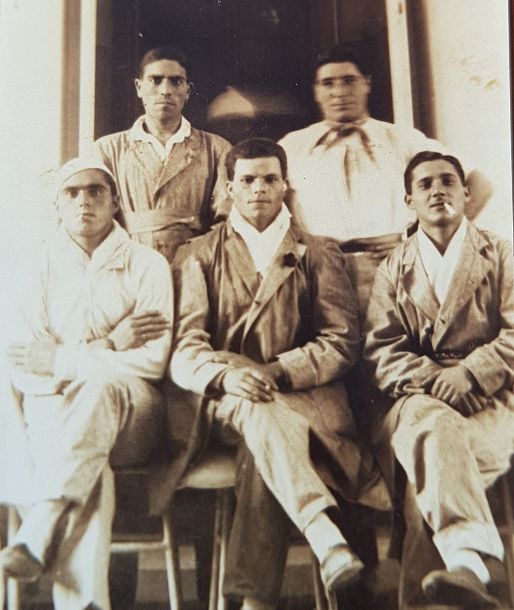 Giuseppe Spagnolo is the full name of my maternal grand father, i have never met. He’s born on February 2, 1910 into a farming family of Ravanusa, Provincia d’Agrigento. During his childhood he went to elementary school but after a family tragedy in which he was involved, he was taken care of and raised by his grandfather until adulthood. 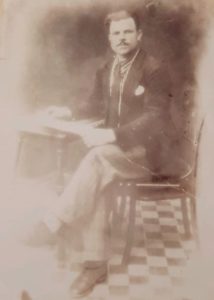 A few years after, when he was 17, he met my grandmother and fell in love at first sight. From this moment he had only one idea in mind… to marry her.
He somehow managed to convince his parents to meet the B. family (my grandmother’s family) in order to make his proposal.
At first, the B. father refused. However, thanks to the help of his mother-in-law, the wedding proposal was accepted as long as Giuseppe could get a good job in order to support his family.
Therefore he initially joined his older brother in the carabinieri training centre. But once again, Giuseppe did not want to wait for the two years of training before getting married and then tricked in order to be flunked at the entrance exam.
Moreover he used the money his father gave him to buy gifts to his fiancée and her four sisters. Immediately, the two fathers put an end to the wedding preparations. However, Vita begged her father so much he finally accepted.
On 10 july 1930, Vita and Giuseppe got married.
During the three following years, the couple lived happily, hanging out, going dance, visiting friends and relatives.
In 1933, they had their first son, followed by a daughter 1936 and a second son in 1939.
During this period my grandfather surely did his military service and got a military nursing training.
He also finished the military service with the rank of corporal.
My grand mother will tell later that she did not see her husband so much for seven years with the military service and the following World War II.
Then World War II began.
Giuseppe decided to volunteer for the italian army in order to allow his family to receive a military pension…and without the friendly owner of an online community project (https://italianprisonersofwar.com/
and @prigionieridiguerraitalianiAustralia on Facebook) I would not have so much details about the war period of my grand father.
Thus his division arrived at Taguria, Libya in October 1939. Then they invaded Egypt as part of the 10th Army in September 1940 before covering the retreat of remnants of 10th Army back to Libya in December 1940.
They were finally defeated at Sidi Barrani and my grandfather was captured on December, 10th.
Then he was shipped as prisoner on the Queen Elisabeth and arrived in Sydney on October 1941 before being transferred to COWRA camp where he mostly stayed until he got repatriated at the end of march 1943.
After disembarking in an italian port, he first helped to transport the wounded to Naples and then returned on foot to Sicily.
However, before arriving in Ravanusa, he decided to visit one of his cousins in order to shave, wash and dress up because he always liked to be well prepared. It seems likely to continue nowadays…
​
After the war, he worked for some time as a farmer on the family’s land. He even had some employees and planned to expand his land. But once again, an unfortunate event put an end to this project and even made him lost all his savings.
That’s why in 1946, he decided to move to France and find a work there.
First he arrived in the south of France, near the town of Nice where one of his sister-in-law and her
son were living. He did very harrassing work that most French people did not want to do. Once a worksite was over, he was searching for another one.
That’s how he arrived in Rive-de-Gier, a small town of 26000 inhabitants in the Region Rhone-Alpes.
Like in Nice, he first was employed to install water drains in this factory town.
Then thanks to his natural aura, he met former expatriate sicilians who helped him to find an “available housing” on Baldeyrou street.
At that time, some of these housings were still unsanitary without tap water or restroom inside.
Therefore he started to do some renovations and sent money to his wife for crossing the borders.
At the same time, in Sicily, my grandmother sold her house and all her furniture.
Unfortunately, the first try was a failure. They arrived in Menton and were brought with other illegals immigrants in a large common area, so that the police could easily arrest them all and took them back to the border with a warning.
Thus my grand mother and her 3 children went back to her parents in Sicily.
A few months later, Giuseppe sent her money again to cross the borders.
This time, my grand mother requested to the smuggler to bring them in a private hotel and then she gave him one half of the banknotes she had just torn in half.
Once she arrived in the private hotel, she gave him the second half of the banknotes.
Unfortunately, during the night, the owner of the private hotel woke her up and urge her to flee because the police was coming.
She left very quickly, leaving almost all her belongings.
After a few weeks at her sister’s, she joined her husband in Rive-de-Gier.
Now let’s go back to my grand father.
After the water drains installation, he found a job in one of the glass factories in Rive-de-Gier.
There he worked tirelessly in order to earn enough money and buy his family a more comfortable house.
Indeed, the apartment on Baldeyrou street was not only a bit unhealthy with a few rooms but sometimes my grand father welcomed foreigners and his own brothers after they have asked him help and hospitality. He also gave to some of them enough money to continue their journey to Germany.
However in late 1948, my grand mother was pregnant with my mother. She asked her husband to find another place for his brothers in order to give birth safely at home. Then, Giuseppe paid them the rent and the purchase of the furniture.
On January 24, 1949, MARIE (and not Maria) was born. My grandfather chose this spelling because he wished to havea French girl in the family. He loved France.
INSTAGRAM https://www.instagram.com/ian_toni/
​
previous post

White wines from Piedmont by Winespicegirl

Puglia, From Salento To Gargano, Top 10 Of The Most Beautiful Beaches!

maybe he knew my grandfather Antonino Lumia. Here is his story.
https://youtu.be/mFFgsvNfHlY